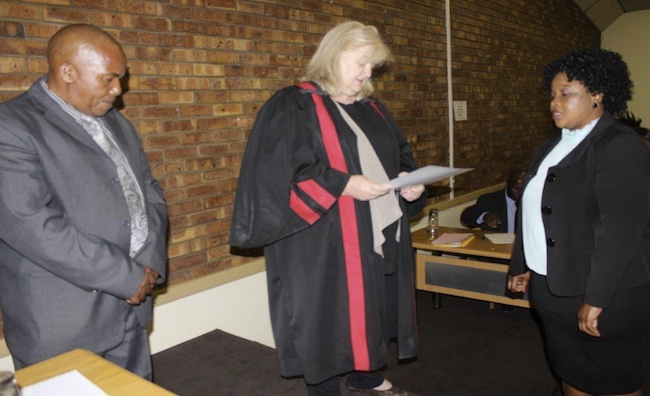 Cllr F.A Malinga swearing under oath in front of the Speaker and the magistrate

The Newcastle Municipality sworn-in one of the Inkatha Freedom Party devotee as a PR councillor. Ms. Fikile Angel Malinga was finally sworn-in as a PR councillor on Wednesday the 2nd of September at the Newcastle Council chamber. Present to witness this prestigious event was the whole of Exco, councilors, to officiate the induction the court magistrate Mrs. Hills was also present.

According to the Newcastle Municipal Speaker Cllr Mandla Zikhali, Ms. Malinga was appointed after the resignation of P.R Cllr M .Mlangeni due to personal circumstances. Ms. Mlangeni swore under oath to serve the community she represent without fear or favor. She promised to carry forward the mandate given to her by council which is in line with the vision and mission of the Newcastle Municipality. Council welcomes the newly appointed Cllr and believes that her contribution will be colossally.