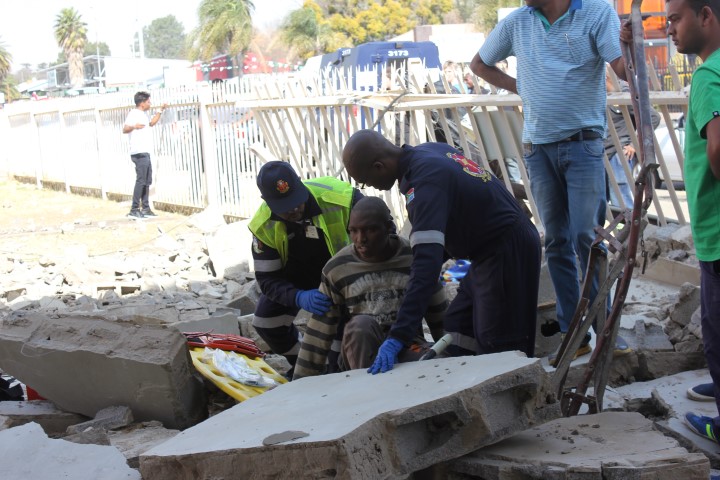 On the 13th August 2015, the municipality was alerted to the collapsed building at the corner of Ayliff and Paterson Street which ended with fatal injuries. We have been made aware that 1 person died from injuries whilst others had sustained injuries. Notably on this day, Newcastle was experiencing strong winds, which could have partially attributed to the collapse of the building. However, an internal investigation is being carried out by the department of Development Planning and Human Settlements to determine precisely matters that gave rise to this tragedy. Nonetheless, our preliminary report on the status of construction underway revealed the following aspects:

1. The building construction commenced without the approved building plans as such the foundation was not inspected and approved by Building Inspectors;
2. the time (10 April 2015) when the owner of the property was ordered to cease construction the foundation of the building was already casted;
3. Building plans were submitted on the 15th April 2015 and finally approved on 20 April 2015;
4. As part of the approved plans, the owner was advised to appoint an engineer given the type of construction to ensure;
5. As such DESK 22 was appointed as the consulting Engineer on the project and Roofman, the builder;
6. The Engineer’s designs/ drawings differ materially from the architectural drawings approved by the municipality in the following areas:
6.1 The structural walls are constructed out of 190mm hollow core blocks instead of the approved 230mm bricks. It is expected that the strengths of these walls will differ;
6.2 Centre of the Gable walls contains a 460 X 460 width without stanchion contrary to the approved plans showing the centre with stanchion lateral support width enclosed in the brick pier;
6.3 The structure is made out of portal frame with castellated beams as opposed to the Council approved mono-pitch steel truss construction;
6.4 The brickforce visible from the collapsed wall appeared to be less than the minimum requirement;

At this stage a letter has been written to the owner of the premises (Mr Singh) to furnish the municipality with detailed report articulating issues that gave rise to the structural failure of the South eastern wall and validation that the remaining walls and castellated roof is sound safe for human occupation. Attempts to reach the engineer have been in vein. It is understood that other institutions are involved on this matter such as SAPS and Department of Labour.

The Mayor of Newcastle Cllr Afzul Rehman on Behalf of Newcastle Municipality would like to extend his condolences to the family of the life lost and a speedy recovery to those injured. Our thoughts and heartfelt sympathies are with the families during this difficult.

Mayor Afzul Rehman hands over houses to women in need

President Zuma: Government committed to improve the lives of women Scroll to top