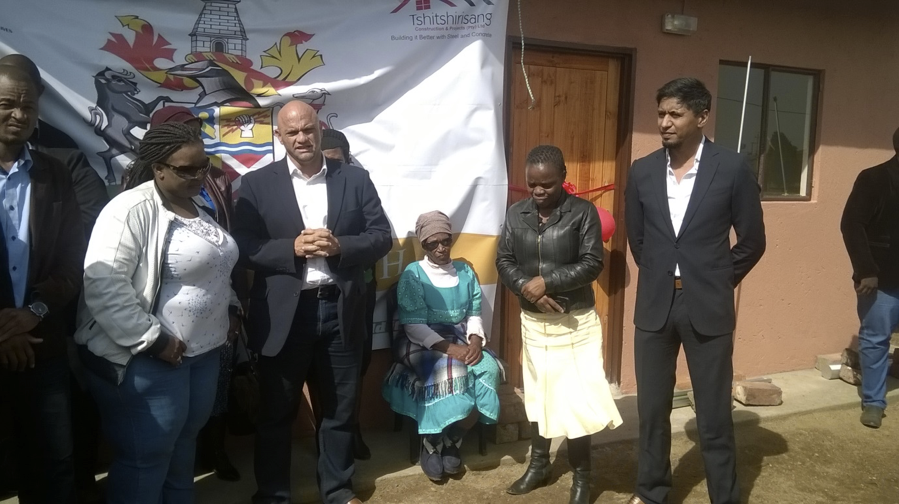 From the right, Mayor Cllr Afzul Rehman with the Manager in the Office of the Mayor, Ms Nomusa Mtshali and sitting down is Gogo Noboli Martha Nkambule who was handed over the house by Mayor Rehman.

Newcastle Municipality Mayor Afzul Rehman handed over houses to two disadvantaged women headed households on Thursday, 13 August 2015 in Maskraal, Emavillakazini in ward 31 and Osizweni in ward 10, as part the many continuous initiatives the Newcastle Municipality has planned to help uplift the community as we commemorate Women’s Month.

Gogo, Noboli Martha Nkambule who resides in Osizweni is a 78 year old pensioner, lives with her great grandchildren, relying on her pension money to take care of her family as she is the sole breadwinner. Gogo Nkambule’s condition was identified through the ward 10 War Room and brought to the attention of Mayor, Cllr, Rehman. The Jiyane family who reside in Maskraal were also handed over a house as a mother lives with her two children, one of whom is physically disabled. The Jiyane’s family poor circumstances were identified by their local church who reported the matter to their ward councillor, whom than passed it to the office of the Mayor.

Newcastle Municipality recognises that women, children and the elderly are the most affected by the triple challenges of unemployment, poverty and inequality, which continue to persist, despite progress made since the first democratic elections. Newcastle remains committed to assisting its citizens in any way possible and providing safe and dignified housing for all its residents.