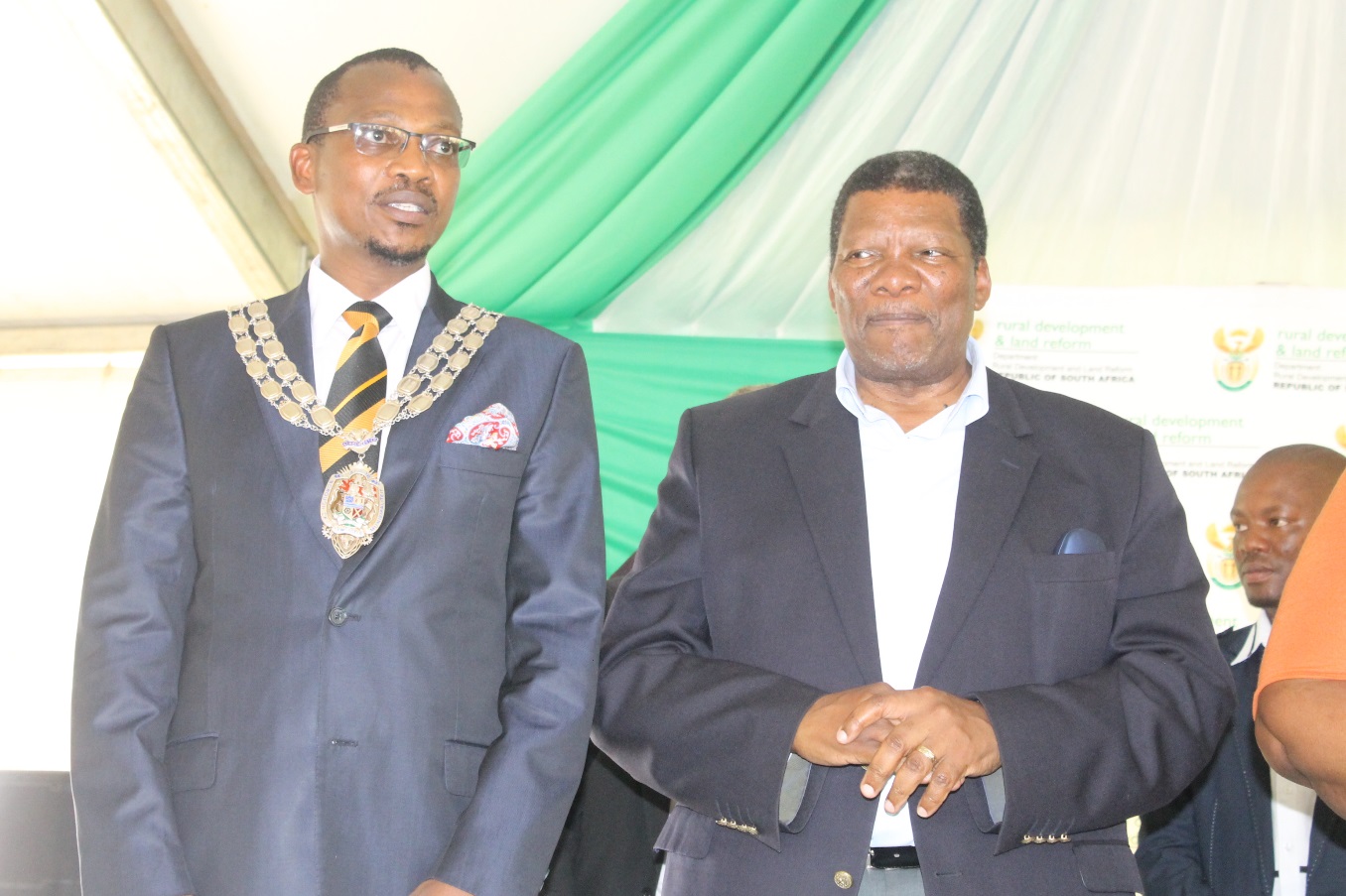 Minister of Rural Development and Land Reform, Mr Gugile Nkwinti accompanied by the Mayor of the Newcastle Local Municipality, Cllr Makhosini Nkosi handed over Land Use Rights certificates to two Labour Tenants communities who applied for ownership of the Up & Down and Clontarf farms in Newcastle on Saturday.

The Land Use Rights Certificates in the form of title deeds grants the labour tenants ownerships rights in the land that they once worked as farm workers/dwellers and it enables them to grow crops and demarcate some portions of the land for grazing. The acquisition of land for labour tenants is also part of efforts to ensure security of tenure as farm dwellers often face eviction from the farms, which then leaves them homeless in many instances.

In terms of the Labour Tenants Act, Labour tenants are permitted to apply for portions of the farms on which they reside. Beside empowering labour tenants by allocating land to them, it enables them to get access to municipal services such as clean water, sanitation and electricity which have proved difficult to access on privately owned land.

The Contarf farm is situated about 15 kilometres outside Newcastle towards Utrecht and it is about 280.0924 hectares in extent. It was purchased by the Department of Rural Development and Land Reform and allocated to 44 beneficiaries of the Hallowheel Communal Property Association.

The Up and Down farm is situated in Normadien area about 40 kilometres from Newcastle towards Ladysmith. The size of the farm is 8701.313.600 hectares and it is currently used for cropping and livestock farming. The department allocated the farm to the Mzanywa Family Trust which is made up of 18 family members. The farm was purchased to the sum of over R1.7 million.

Both farms were purchased by the department through the Pro-active Land Acquisition Strategy (PLAS) and the hand over is in line with Section 11 of the Provision of Land Assistance Act which provides for beneficiaries to receive post settlement support in order that the farms become sustainable.

Handing over the farms, Minister Nkwinti told the community that the Department will allocate a budget for farms acquired for labour tenants to ensure they receive the necessary support to remain productive. Minister also mentioned that he will appoint local mayors and ward councillors to be the champions of the farming community by helping the department in its endeavours to uplift labour tenants turned farmers.

“I will give them direct authority to monitor state acquired farms under the control of labour tenants. I want them to also align government land reform programmes with their Integrated Development Plans”, he said.

Mayor Nkosi said government is changing the lives of people particularly those who live on farms.

“We are aware of the triple challenge of poverty, hunger and unemployment in our country and people living in rural communities are most affected by this. Farm dwellers do not have adequate services like water supply and in most cases they drink the same water with cattle. We must work harder to ensure the lives of rural communities improve”.

The mayor also added that people are given land and become the laughing stock because they are unable to use land after it is allocated to them.

“As Africans we need to acknowledge that poverty and hunger will be eradicated through agriculture,” he added.

The beneficiaries said they were grateful for the support of government in acquiring the farms adding that they had been waiting a long time for the day when they will own the farm on which generations of the families had worked and lived.