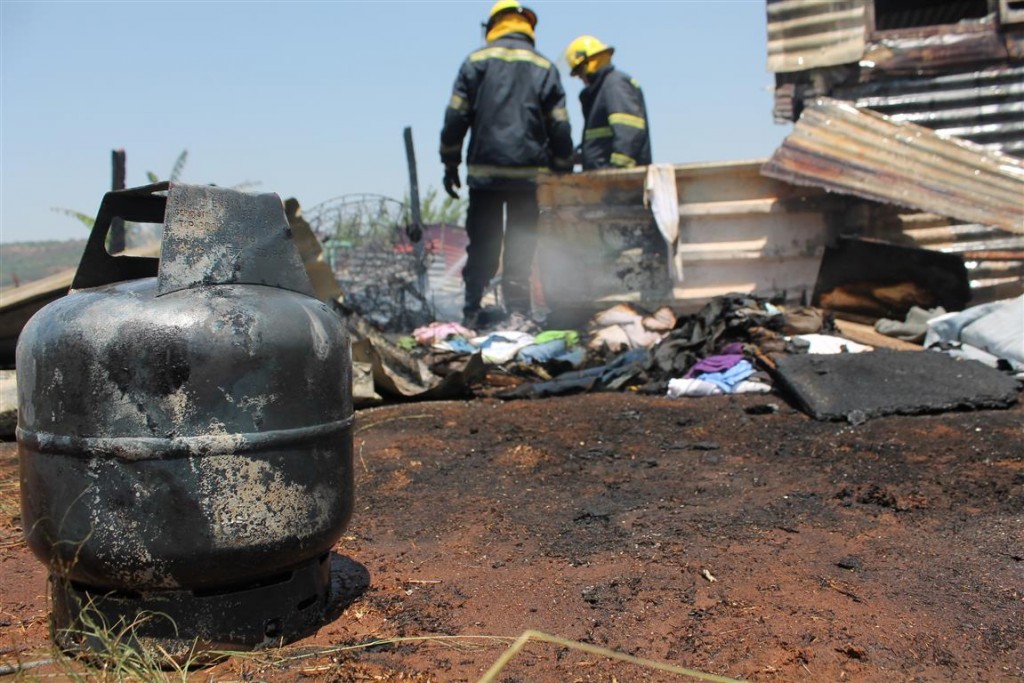 In the late hours of Sunday the 2nd of November 2014, a call came through the Protection services department reporting once again that a fire at broken out at Siyahlala Informal Settlement (ward 25).

Less than a month ago a similar incident had occurred when a shack burnt down from a mysterious causes resulting to the family losing all their belongings, unfortunately the lives of four people were lost.

Eight firefighters were dispersed to the site finding the whole shack engulfed with angry flames after what the community claimed was led to an explosion. On arrival firefighters worked tirelessly to extinguish the fire whilst making sure that the flames do not spread to adjacent households.”

“Bystanders informed me that there was a huge explosion. This was evident because in the shack there were two generators, two 19kg gas cylinders, two 48kg cylinders and not less than five 9kg gas cylinders. By the look of things, the shack was a fortress the way it was locked”. Said Mr. Mpeko (Acting Chief Fire Officer)

According to the SAPS the place was used as a shebeen, belonging to a widowed woman who stayed with her three children. ” There was absolutely no way that any of the deceased would have made it out of there, the fire was too intense because of the LPG found from the generators, the lock as well made it even more impossible to save them, this is mainly why the deceased where found burnt beyond recognition”. Concluded Mr. Mpeko

The fire prevention division within the Newcastle Municipality visited the Siyahlala-la community a few weeks ago to conduct fire awareness campaigns thus giving the community Fire Safety Precautions. It was through the rising number of households and agricultural land ravaged by fires that the Newcastle Fire Service became concerned and therefore decided to visit and workshop the community.

It is a known fact that fires can never be prevented, since it`s a crucial element in preserving nature. However, they can be prevented from damaging items and areas of value.

It is therefore the role of each one of us to join efforts in the fight against unwanted fires.

The fire department had the following Fire Safety tips for the residents:

• Always remember all fires start small.
• Fires need oxygen, something to light it and something that can burn.
• Removing any of the three elements stops the fire.
• Avoid unnecessary open flames.
• Keep your property free of grown and dry vegetation.
• Make firebreaks around your property (farm).
• Check Fire Danger Index (FDI) with the Fire Protection Association (FPA) office and /or fire department before making a firebreak.
• Avoid accumulation of combustibles in an unprotected area.
• Do not take a chance with open fires on a windy day.
• Keep matches away from children
• Keep fuel can away from children
• Make sure you extinguish the fire after a braai.
• Report ALL FIRES you can see regardless of size.
• Switch off the heater and stoves when you go to bed or when leaving the house.
• Do not place heaters to close to bed linen or curtains or any combustible material.
• Do not overload electrical plug sockets.
• Do not leave children alone in the house with heater/stove on.
• Stay away from bad habits that can cause harm to life, property and environment.
• Report ALL FIRES on 034 312 1222